Rishi Dhir of Elephant Stone – “Everything is Circular”

Rishi Dhir is the frontman of the Montreal based outfit Elephant Stone. Now touring in support of their fourth full length record Ship of Fools, Elephant Stone have made unorthodox contributions to rock and roll by combining sleek, pop sensibilities with well crafted studio experiments and psychedelic flirtations. Rishi Dhir speaks with A Love That’s Sound about old school psychedelia, electronic influence and about his collaborating with some of the genre’s most respected artists.

DL: It’s been a little while since the Three Poisons came out. Word is that you’ve been back recording in the studio. How is that going?

Rishi Dhir: The album came out and there was a lot of promises made by labels and such and it all fell through. We were touring alot, we were touring in Europe and we came back broke. And so I cancelled… we had this US tour booked and I canceled it because we were broke. So I decided to just write a new record. [Laughs] You need new material so I figured that was the best way to move forward and deal with all that was happening.

DL: There’s a lot of neat people associated with that. Can you tell us about your new song with Alex Maas of the Black Angels?

Rishi Dhir: Before I started the demo for this album, I was demoing the album and I wanted Alex involved. I was actually talking to Alex about getting involved as a producer so I sent songs to him and he was loving them but he said that the Black Angels were going to be busy so he didn’t know timing wise how it would work. So I was like “no worries, how about you just sing on one song?” So I sent him the demo of the song and I told him to re-sing everything I sang and he sent it back to us. We went into the studio and we just used those original vocals that he sent  to us cause I knew the song…. he’s such a great singer, he brings this vibe. As soon as he tracked his vocals, I was playing my wife and she’s like “that’s it.” I wasn’t so sure about the song, it’s a good song but it was missing something. But as soon as Alex sang it was great.

DL: Alex has worked with a lot of great people, like Brownout for example.

Rishi Dhir: He’s always open to recording with people. He’s such a talent and such a good soul. It’s nice to have him on it.

DL: Do you have any good stories from touring with the Black Angels?

Rishi Dhir: Good Stories? That tour was a good time. That was our first album that got attention, it was our second record. It was just really good timing. We did the US and we Europe together. Europe was pretty fun. We had a good time in Paris. Paris is always a good time.

DL: Elephant Stone is on a west coast tour right now. Do you find a discernible difference between the west and the east coast?

Rishi Dhir: Yeah I think people get us more out west. It’s funny, it’s always been like that, even with my old bands. It’s kind of like when you play England or Europe, there’s music lovers there. The west coast is like that I find. There’s less posturing and more appreciation of music. I always think that the west has more appreciation for the arts than the east.

DL: What was it like opening up for the Charlatans?

Rishi Dhir: [Laughs] It was cool, it was completely last minute.  It was great, it was a perfect crowd for us. It was kind of an older crowd, a lot of Brit-poppers, a lot of lads. When we started playing, we opened up with the sitar, that is definitely a way to draw people in immediately. It was great. Tim was super cool, the whole band is super nice.

Rishi Dhir: yeah, i’m a complete music nerd, my whole life is about that. When we make music, I don’t think about that really, anymore. In my old bands, going back to the late ‘90s and ‘00s, I was in a mod band. The Datsons, we were mods. We wore suits, I bought a scooter. we only listened to music pre-67. And then we discovered F.S. Sorrow and Oddesey & Oracle, this was in 2001, 2002 and then we were obsessed with that, full on doing psych rock. Now with this band, I don’t know what this band is anymore. It’s like, I write pop songs but it has evolved. On the first record, I was trying to do an All Things Must Pass kind of vibe. With the Elephant Stone record, I guess that was our psych record, I wanted to catch this singular sound that we had.

Then with The Three Poisons, I wanted to experiment a bit more and see what we could do. That was our studio album. I demoed the songs myself but I never really did it with the band, so we went into the studio, and I was like “we’re just going to work and you’re going to learn the songs in the studio.” So it was kind of challenging in some ways, it was a good learning experience. But on the new album, we worked with a bigger producer, he did the National and the Arcade Fire, he’s a Montreal guy. I recorded the album at home by myself once and I recorded it again individually with the band members. And the band, we learned the whole album again, playing as a three piece and then we went to the studio and recorded the album again with a producer. The new stuff, I don’t know, we are talking about what it is now and I have no idea what the new stuff is. I’m just calling it rock ’n roll but there’s more to it.

DL: Were there any major injections of musical influence? When we talked before about The Three Poisons,  you mentioned finding a box full of English 12” records on the side of the road having a big inspiration.

Rishi Dhir: I guess it comes back to that box because there were all of these 12” remixes of all these bands but for this one, I was getting into a lot of house.  I was obsessed with Screamadelica for this one. I guess XTRMNTR era Primal Scream and stuff like that. A lot more dancey house stuff like Sly Stone and Julian Cope. This album has become something else. 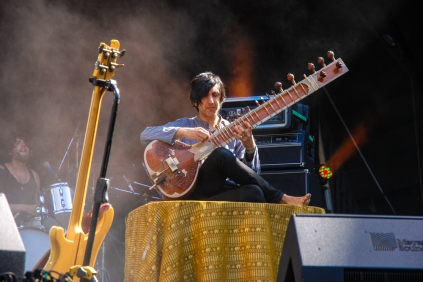 DL: Let’s talk about the sitar for a moment. In Vancouver, there is a massive east Indian population. How has the east Indian community received your music?

DL: What is your history with the Brian Jonestown Massacre? There is an excellent video of you playing sitar with them at Austin Psych Fest 2012.

Rishi Dhir: I’ve known Anton for 12 or 13 years. I keep in touch with him but he lives in Berlin. I keep in touch with all of the BJM band members but the BJM is Anton Newcombe. He’s achieved such a status in Indie rock/psychedelic rock. When you talk about the BJM, there’s no point in mentioning anyone other than Anton. You can talk about Joel Gion or the other guys but really it’s all Anton. My relationship with him… I am friendly with him, I say that we are friends but I don’t think that you can truly be in a relationship with Anton at that level; he is such an anomaly; he has created his own world and he lets you in sometimes.

DL: Following up about that group, they have had some other promising songwriting, obviously Matt Hollywood but also Matt Towes of the Lovetones has also written song.

Rishi Dhir: Oh yeah, what is it, “Starcleaner”? That is one of my favourite songs. Anton uses people’s music. He’s got such a good ear and a sense of melody. He has such a good taste. He just knows what’s good when he hears it. And yeah, Matt is involved in it but it’s really Anton’s show. Matt Hollywood is an amazing person and talent but would he have written those songs without Anton? Unlikely. 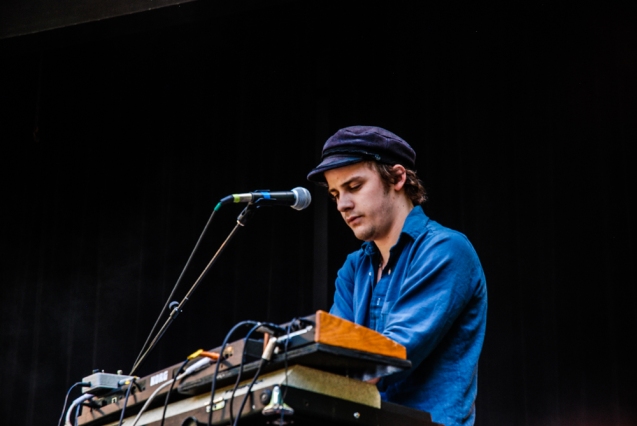 DL: What is your take on modern electronic music culture?

Rishi Dhir: Music is music, if it sounds good it sounds good. For this new record, I got into synthesizers and stuff like that. Electronic music goes back to Kraftwerk and stuff like that and we love Krautrock, so it’s all tied together. And bands like Disclosure, they do really interesting stuff. St. Vincent, I wouldn’t say that she is electronic but she has this electronic feel to her.

DL: What’s your take on the cassette revival?

Rishi Dhir: Everything is circular. I had a conversation with some friends about cassettes. That is how I discovered music in the early ‘90s was by buying cassettes. I was commenting on how vinyl is overrated; I use Spotify now, I don’t buy music anymore. I can discover amazing bands all the time which in turn has it’s influence on my band; the fact is that I can discover so much new music whenever I want now. But the cassette thing is cool, if it gets kids to turn onto new bands. I’m friends with the Burger Records guys and they are genuine music fans and they are doing it for all of the right reasons. If it makes music better, that’s amazing.

DL: How about being in a Canadian band? There are plenty of subsidy programs for musicians such as FACTOR and SOCAN. How have these programs helped you make music?

Rishi Dhir: For us, we benefit mostly from Quebec art grants. I wouldn’t be here if it wasn’t for those grants. It’s kind of a double edged sword. Sure, any band can get a grant and tour Europe but should they be touring Europe, you know? Should every Canadian band be out there touring? No, they should probably be out there to work hard and get better, it’s a craft. So, I’m not one to talk about the screening process. I think it’s good and bad, Canadian music suffers because of those grants. They support mediocrity, that’s what it is. That’s why I think that the UK has the most interesting music because it’s depressing, it’s dark and there’s no subsidies. They have no way out; music and art is the way to get out. In Canada, there’s so much bad music here but there are some bands that work hard and have the drive and passion to do it.

There was an error retrieving images from Instagram. An attempt will be remade in a few minutes.